Jacob is a Swedish nurse and an ambulance worker, and his girlfriend Sara is a Spanish paediatrician. The two live in Stockholm and have been a couple since 2009. They have a 9-month-old baby.

Sara and Jacob met at a party in Udine, Italy, when they were students on the ERASMUS European university exchange program. Sara proposed a Calimocho to Jacob (a typical drink for young people in Spain. It consists of a dangerous mixture of cheap red wine and Coca-Cola), and shortly after, they fell in love. They immediately talked about having children one day. Jacob dreamed of having 13, she replied, "don't overdo this".

Both always had busy weeks and long shifts but never complained about it. They are used to being flexible and dealing with the unexpected. They know being a health professional in Sweden is not the same as in other countries. Working conditions are usually better. Parental and maternity leave, for example, are a total of 480 days that can be distributed between parents as they wish. During her pregnancy, Sara worked until her 34th week and never had a problem getting to her doctor's appointments. In her work, they always offered solutions. For example, they adapted her schedules during the pandemic so that she did not have to take public transportation during rush hours. "The Swedish system was very good to me," she insists. Jacob has manageable schedules but also many meetings because he is in charge of improving the routines of the healthcare staff in his hospital.

Despite these good working conditions, the couple must deal with a lot of stress at work, and sometimes they bring those stories back home. "We are not machines", Sara explains. The level of responsibility and proximity to pain and death are not easy to bear, but they support each other. After work, they talk together and in Stockholm, there are protocols for psychological help in the hospital. In the ambulance sector, it is pretty frequent because it involves personnel in the front row and overexposed to difficult situations. Sara thinks that Jacob's work is hard. She has a heavy workload herself but not the stress of emergencies. She is proud of her partner: "Jacob is a super dad, and he is the best nurse in the world." 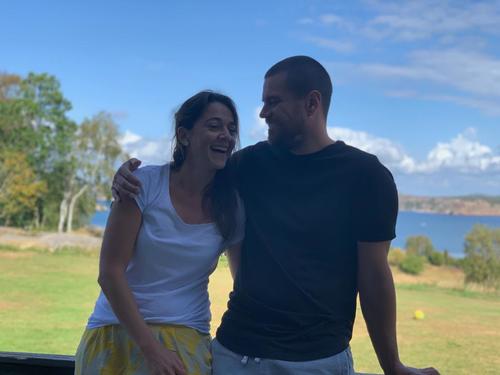 At home, he takes care of the food and cleans the kitchen. The doctor believes that the housework is divided like it follows : 70% for her and 30% for him, although he covers the household expenses and takes care of the administrative tasks. Even after having a baby, the couple continues to travel frequently to Finland, Jacob's father's country, and Spain. In her spare time, she walks a lot, despite the inclement weather in the Scandinavian capital, and works out at the gym. Jacob plays soccer when his knee, operated twice, allows him to. Sara also loves watching series that take place in hospitals. "The hospital environment is not like in Grey's Anatomy, but it is true that you spend a lot of time in consultations and create solid connections with other colleagues. For teamwork, you need that complicity and have good relationships. You try to be nice, and sometimes it evolves into true friendships."

The last romantic dinner they had after the arrival of their daughter was not a success. They were both so exhausted that they ended up eating sausages before going to sleep. "A year ago, we used to dine in restaurants at least once a month, and we always found a moment in the week to have a glass of wine at home. Sometimes they have met at the hospital and hided in the kitchen to kiss, but they are generally very discreet. "You have to be professional," says Sara with a smile.

The doctor and nurse have a sense of humour. Jacob says that Sara is "the boss" and that it doesn't bother him that she earns more than him. "I am fine with that too," she answers, laughing. "What happens to me is that I feel more empathic with the nurses at work because I understand the pressure we put on them."

When I ask for their plans for Valentine's Day, Sara tells her partner, "we really have to come up with something to look cool". He proposes a walk along the river and a dinner. Sara criticizes its "lack of imagination". Finally, they tell me to find something myself. I try, but nothing comes to mind. Probably because these two don't really need to celebrate that day. What they have is unique and they form an indivisible team. Love is in the air…