An article and short interview with Leyla Bartet, a Peruvian-Spanish writer, journalist, and sociologist about Madrid and Chueca, the district where she currently lives.

At the end of the 19th century and the beginning of the 20th, in the heat of political changes, social movements and the gradual development of liberal ideologies, the Spanish rulers decided to modernise Madrid. They wanted to give the sunny metropolis surrounded by mountains a central place in the European context to rival other European cities in architectural beauty. As a result, important buildings and monuments were built, such as the Opera, the Paseo de Recoletos and the Prado, Puerta del Sol and Art-nouveau-inspired houses that still enhance the streets of the so-called French Quarter that borders a neighbourhood known as Chueca. But the political difficulties, and in particular, the Civil War (1936-1938) and the establishment of Franco’s dictatorship, put the development of the city centre on hold and implied a process of decline and impoverishment. 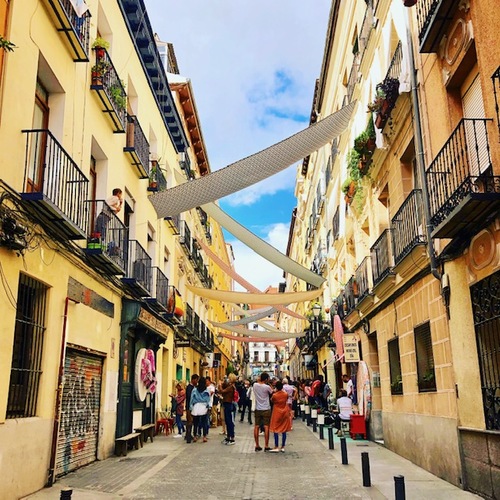 Copyright Anaïs Ortega.  Huertas Cortes: a lovely area full of restaurants, home to some of the greatest writers of the Golden Age of Spanish literature

The LGTBI + community began to live in Chueca precisely because it was a marginalised population persecuted during the dictatorship. In the 90s, the area was considered a dangerous place, with drug dealing and all kinds of criminal activities. However, things started to change during those years. People from the community decided to participate in the neighbourhood’s reforms, transforming it and building a new diverse and tolerant space. The contemporary history of this area is in sync with Madrid’s history. The 80s are the so-called years of the Movida, a countercultural movement that emerged after the death of Dictator Franco during the transition towards democracy in Spain. A period that Almodóvar’s cinema brilliantly illustrated. Chueca was slowly expressing its social and political demands, and the first LGTBI + organisations in Madrid were created in the neighbourhood. These are the first years of the Pride demonstration in Madrid (the pioneers call it Mani-fiesta, a play with words with the terms manifestar-demonstrate and fiesta-party). In 1989 only 150 people participated to the event, but today it has become one of the largest Prides in the world, attracting more than one and a half million people every year. However, this visibility also provokes criticism. The writer and journalist Leopoldo Alas explained in the 2003 documentary “Chueca, looking for an identity” he worries about what affirming one’s personality through sexuality implies and asks if it does not trigger a form of cultural impoverishment. From his perspective, the neighbourhood is no longer a space of freedom but has become a ghetto with a predominant model where the community is homogenised and marginalised. However, Chueca has also demonstrated a capacity to open up and become a space of tolerance and coexistence.

Today, the area has undergone a total makeover: Some talk about gentrification, others about a rejuvenation process that has transformed this place into one of the most fun and lively neighbourhoods in Europe. No matter how the process and history of this place is perceived and understood, Chueca is very much connected to Madrid’s pulse through values ​​such as solidarity, openness, and the extremely sociable and outgoing locals that cultivate simplicity and a charming irreverence. 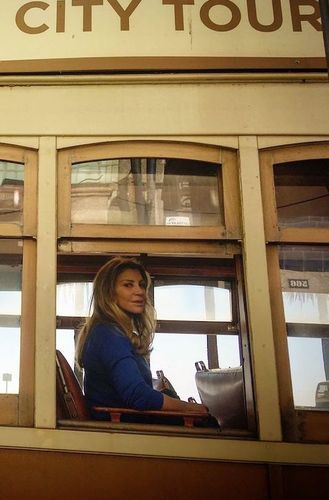 1) Have you lived here in Chueca and Madrid for a long time?

I have been living in Madrid for five years. Before that, I spent most of my life in Paris, so it was a significant change for me. It could have been more difficult. It was important for me to live in a place where it was possible to feel the history of this country. I first lived in the district of the Royal Palace between the beautiful Plaza de la Villa (Unesco Heritage) and the Plaza de la Paja, which is the gateway to the old Moreria (Moorish district), an area from the 18th and 19th centuries. Nowadays I live in Chueca.

2) What do you like the most about this city, and what aspects of Chueca appeal to you

I like the balance between modernity, cosmopolitanism, and tradition in Madrid. The city has grown spatially and numerically and welcomes thousands of foreigners every year. It has opened itself to other ways of life without losing its warmth and personality or forgetting what makes her unique. A good example is gastronomy: in Madrid, you can eat good Japanese, Peruvian, Mexican or Thai cuisine, but you can also find traditional Spanish restaurants, always full of locals who do not forget their regional cuisine. Chueca is, in this sense, an emblematic district. There are thousands of places that match the very diverse population of this area: from vegan bistros to Michelin stars restaurants. There is an audience for everything.

3) Like many European cities, Madrid mixes tradition and modernity, historical richness and avant-garde. What is interesting about its past, and what are the advantages of Madrid if you compare it to other European capitals?

I very much appreciate its diversity, and I also like the fact that if I stumble in the street (that can happen to anybody), many people will try to help me and ask if I’m okay. The indifference that I’ve seen in other major capitals of the world does not exist here. Instead, folks are friendly and supportive like nowhere else.

Here you can do the same things as in any other big European city, but surrounded by human warmth and at a significantly lower cost.