"Gynaecology is a priesthood," explains Dr. Djellali with some sense of humour. Even as a child, she remembers her mother talking about her gynaecologist. She thought this man who took care of women so well must be a demigod. That's when she found her vocation and proudly announced to her family that she wanted to become a gynaecologist. This commitment is her raison d’être. She has a name that fits her like a glove: "Safia", which means "loyal" in Arabic. Indeed, commitment and sheer tenacity are crucial in this profession.

Dr. Djellali decided to leave for Afghanistan after a successful career in Tunisia. She started her career in Sousse, then she moved to Tunis, where she chose to work open a private practice to have time left to take care of her sick father. Safia is not only a doctor; when she decided to open her own cabinet, she was also a mother of three young children. She also travelled during her career and participated in congresses in France, United Sates, Germany, Italy and India. Because of her family obligations, her visits were always short but also enriching. Safia felt the desire to practise her profession beyond Tunisian borders. She wanted to change her routine and discover new aspects of her beloved profession. During her exchanges with Prodie Santé, she said she was looking for a purposeful mission and not necessarily for paid work. So obviously when Emmanuelle, the director of our offices in Canada, suggested that she should volunteer for La chaîne de l'espoir, Dr. Djellali did not hesitate for a second and accepted the offer.

The next step was to put Agnès Simon and Safia Djellali in touch. Agnès talked about her long experience in Afghanistan and Safia heard about the difficulties she would encounter there but was not worried. She was only concerned by  making sure she would cover the FMIC needs. She prepared herself relentlessly before the trip. To do so, she contacted her teacher and friend, the dean of the faculty of Sousse and she participated in the English medical course to brush up on her skills and knowledge. In parallel, she practised in public maternity services for a few months. As a former vice-president of the Gynaecology National Society of Tunisia and ex-Secretary General of the Menopause Society, doctor Djellali has never left the academic world. Still, she felt her practice was not enough to prepare herself for Kabul. Aware that the work pace will not be the same, she wanted to be ready and operational as soon as possible. 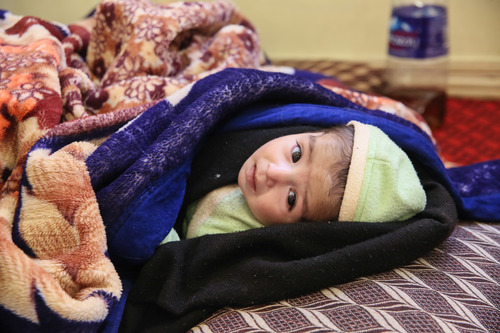 Safia speaks quickly and apologizes for it. The way she tells her story reveals what made her strong, her respect for others and her generosity,even her doubts. She explains that thanks to her two professional experience and human encounters in Kabul, she has a precise idea of the work carried out by the French institute. She also expresses her admiration and respect for the projects of  La chaîne de l'espoir in Afghanistan and its partner Prodie Santé. Dr. Djellali's two missions took place in December 2019 and early March 2020. She recalls the hectic beginning of the pandemic and she remembers the repatriation flights to Istanbul and Dubai that left just before the arrival of former US President Donald Trump in Kabul. What a strange conjunction of events.

On her first trip, she quickly understood the hospital's needs. She was not sure that her areas of expertise, like Assisted Human Reproduction (AHR) and ultrasound, were priority areas for the FMIC. She worked with a specialist in vaginal surgery, but she felt that she did not accurately cover the needs of the hospital. The obstetricians are well trained and while she thought that assistance could be helpful, she did not necessarily considered-it essential.

The feeling of not doing enough is common among volunteers working in difficult areas. It translates into a false impression of being useless and not finding one's place. However, when the end of the mission approaches, it also triggers the paradoxical feeling of abandoning the people involved in the project, whether they are colleagues or patients. Emmanuelle, her contact at Prodie Santé, called her to discuss the situation and became her greatest support.

Gynaecology is a very broad speciality. Dr. Djellali wrote in her end-of-mission reports that even if it is not a vital priority, there is a local demand for AHR. As fate would have it, she met a woman at the FMIC who was desperately trying to have a child with her husband. Unfortunately, the hospital didn't have the means to help her, so the couple clung to the hope that the dream will come true one day. To thank Doctor Djellali forher work, the couple gave her a cloth embroidered with the name "SAFIA". Ever since the establishment has been trying to develop its AHR service. Dr. Djellali work has been critical for this sector at the FMIC. As a history and archaeology enthusiast, Safia always keeps in mind the words of Anatole France: "Let's not lose anything in the past. Only the past completes the future".