The Kite Runner, Khaled Hosseini's novel published in 2003, tells the contemporary history of Afghanistan since the 1970s through the story of a broken friendship. It is one of the novels that Dr. Amélie Grouin read before going on her first mission to the FMIC. In Afghanistan, from November to March, the capital's sky is filled with kites. Once made of silk, the strings of these funny paper birds are now made of nylon, soaked in rice glue and coated with mini glass shards to cut off competitors. When they were in power from 1996 to 2001, the Taliban banned kite competitions. Amélie has learned about the country through her readings, whether purely literary or fmore actual. She knows about the country's geopolitical situation and probably knows that 0-14 year old represent more than 40% of the local population.

A few months before her first assignment, the practitioner was looking for a replacement in Canada. At that time, she wanted to take advantage of a month and a half between two work periods to put her professional skills at work outside the Schengen area. Our Canadian team warned her of the difficulties for a French doctor to temporarily work in this country,and suggested to put her in contact with Agnès Simon, the medical coordinator of La chaîne de l'espoir for their programme at the FMIC. The doctor already knew the association through an earlier work experience in Cambodia when she was still a student. During her studies, she did an internship of almost two months at the cardiology hospital in Phnom Penh, one of the first centres opened by the founder of La chaîne de l'espoir, Professor Alain Deloche. 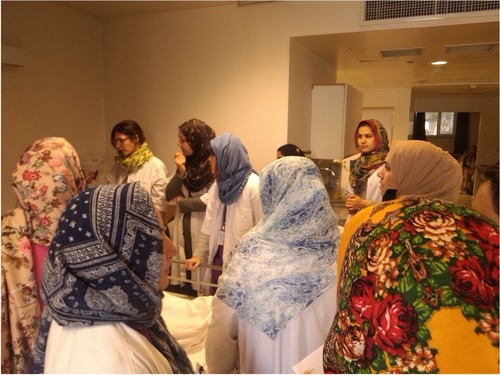 Agnès' story and her experience at the FMIC ended up convincing Amélie to go to Afghanistan and the Dr. Grouin decided to prepar herself for several trips to Kabul. It was crucial for her to give continuity to the commitment and increase the professional benefits for her and the local teams. Agnès, who already had a long experience at the FMIC, talked to the doctor about her work and mission wit honesty. Upon arrival, Amélie got picked up at the airport and was taken directly to the FMIC guest house where the foreign medical staff stays. The doctors work in secure conditions, and Amélie immediately felt at ease. Agnès, who arrived the same day from France, introduced her to the gynaecology team composed of five or six female doctors. Every day, the teams benefited from her support during their visits to the wards and the delivery rooms. The aim was to ensure the best possible management of pain and assisted birth. In the afternoon, to help the staff reinforce their technical knowledge, theoretical courses were provided and/or surgery was performed. Dr. Grouin helped support during night shifts. Everything went well during this first mission in Kabul, so without any hesitation, Dr. Grouin prepared herself for a second visit to the land of lapis lazuli and flaming carpets.

The second mission took place in January 2020. This time, Amélie focused on surgical care. In early 2020, operations were not frequent. Therefore, it was an opportunity to help the local doctors to improve their training. This educational component is the main purpose of these missions since it combines theory with practice. The mornings are dedicated to care, and doctors like Amélie are in the delivery room or in surgery, but in the afternoons, when the medical staff has some free time, they can attend lectures. Communication is very fluid, and the relationship with the team on site is excellent. All the women in the medical and nursing staff are keen to take these courses and are very responsive. They also do not hesitate to discuss with the foreign doctors to inform them of any disagreement and share their experiences and the protocols they follow as well as their medical readings. "These are vibrant discussions," insists Dr. Grouin. She explains that "their comments are very relevant". And she adds that "there is not one way to take care of patients."

Places are made of stories. Tales became the walls of the French hospital in Kabul. They are sad, touching, sometimes difficult to hear. Afghanistan is a country that has suffered a lot, and its civilian population is the victim of endemic violence fuelled by years of war. Dr. Grouin recalls with deep emotions her encounter with her patients and their openness. Amélie remembers those fathers whose faith was about to change forever, filled with a universal emotion waiting in the entrance of the delivery room. Some seemed worried, others were thrilled, but they did not hesitate to approach Dr. Grouin to politely ask about their partner. This trust, tinged with great respect for the work of foreign doctors who do not speak their language and who come from far away, surprised her a little. "They should be less trustful, but they are not," she says. On the contrary Amélie "saw this respect in their eyes "and it moved her.

In Kabul, the French hospital welcomed these three women, passionate about their work, absorbed by their important missions, their minds remembering the faces of the patients who shared a part of their personal history with the medical staff. Together, they are walking towards the future.

Volunteering for an association such as La chaîne de l'espoir is enriching on many levels. The doctors discover a new culture that allows them to broaden their professional and personal horizons. But above all, what lays at the very heart of these doctors' missions and reinforces their commitment is the encounter with people. The deepest meaning of this awork is to invite us to stay open to difference and the singularity of consciousness. Beyond the art of healing lies humanity. This is what gives this profession its full meaning.